We flew all three heats with major malfunctions in our gear! In the first heat we had speed for a sub-3:20 result, but the starting was very poor indeed, costing 10-12 extra seconds. Time 3:30.3.

Earlier this season we had a problem with the prime nozzle being plugged by soot. I have made my own (due to the mod mentioned above) from a .9 mm hypodermic needle, flattened at the nozzle. Now this had happened again! Starting was OK during practice and even the warm-up, so we got no warning sign.

For the next round we rinsed it thoroughly. The full pressure of a CRC 5-56 can wouldn't clear it, and the only workable tool was a strand taken from wire from our spare handle! (Sacrificing it.) After a lot of tries, we could get such a strand through and verify that the passage was free.

Only that this blocking repeated itself in the next race, after just something like 10 tanks worth of practice!!! Sooo silly! A known problem causing two poor results in a row! We improved by .7 seconds, mostly due to flying alone for the last tank.

Before our last race I used a dremel to cut away the prime nozzle to have a full opening. In our practice for the third race we suddenly were short on range, so we stepped down the venturi. Then waited for a new practice slot to get a setting with the new setup. After that we were running short of time and we had to rush off to the heat. Only to find at the warm-up that the engine wouldn't get any fuel, clearly dirt in the needle!! I opened up the needle in panic just to be able to run it, but no result. In spite of total despair, at the start signal I got the model away, and somehow it cleared itself, but how many laps would we get? 21, it turned out. I turned the needle back a lot, but again 21 laps... More turning, but still short. Then we got a gift from above! At the last of our numerous pitstops a landing model caught our lines as ours was also landing. A reflight, fool's luck! Before our reflight we thoroughly rinsed everything, and rushed back to the practice circle for a new setting. Some speed lost, but range OK. In the heat we got two-flick starts, but speed was down, for a 3:25.1 result. A fair improvement, at least.

When I dismantled the engine afterwards, I got a big surprise. There were deep scratches in both the piston and cylinder from a piece of a G circlip broken loose! Getting starts and any sort of speed with such a thing is a wonder! Must have happened early during practice, as we got a sudden stop that we never saw the reason for.

Another thing that happened to us earlier in practice was that on one occasion our model took a dive in a puddle just inside the paved ring of the practice circle after I missed a catch. We had to rinse everything from sand and water. Maybe some of this still got into the tank...
Picture taken seconds before (Mats in the background, hidden by the French) and of the puddle.

This was all too much to happen at any one contest, let alone a World Champs....

Not just frustrations in spite of our equipment letdowns for which I'm solely to blame. Mats did a good job in the centre, in his first Champs F2C entry, especially in our last race. In our second race he came out of the circle bleeding from his hand. It turned out he had slipped and fallen at a landing - I didn't see a thing! Our RPM, speed and stable run caught the attention of some. And above all, meeting and chatting with all the fellow nuts in the trade, seeing all excellent performances - a great pleasure! 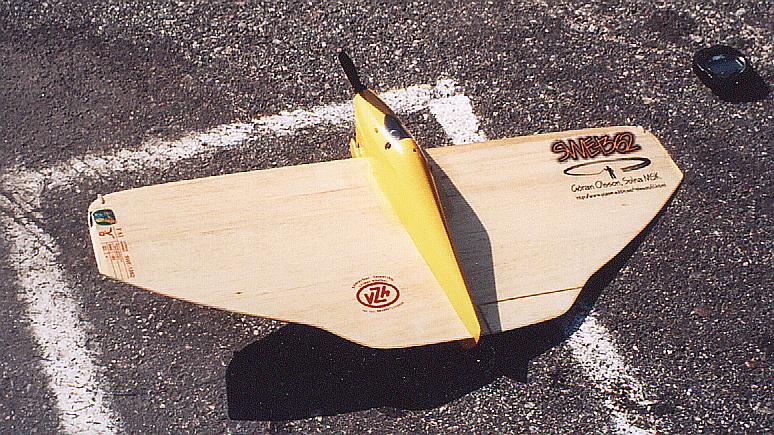